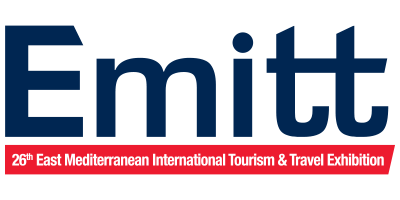 Drawing attention to Türkiye's advantages over the tourism sectors of countries such as Italy, Spain, Greece in Europe, which will implement energy conservation and take measures in winter, EMITT Exhibition Director Hacer Aydın expects that Türkiye will reach its goals of 55 million tourist and achieve 45 billion dollars tourism revenue for 2023.

EMITT, which will be held for the 26th time on the 100th anniversary of the Republic of Türkiye, welcomes thousands of participants from dozens of countries in Istanbul from February 8 to 11, 2023.

Türkiye's tourism industry which is in great demand in the summer of 2022 and currently in a good situation due to the cyclical developments after the pandemic, still continues to attract attention.

Türkiye has increased its number of cruise destination with the opening of Galataport this year in İstanbul. Now, Türkiye's holiday resorts, especially in Antalya, are preparing to welcome European tourists in the winter season.

According to the numbers provided by Turkish Federation of Hoteliers (TÜROFED), winter tourism demands for the upcoming period increased of 20 to 25 percent compared to the previous year, and the three countries with the highest demand are UK, Netherlands, and Germany, respectively.

Indicating that the strong accelaration in tourism had a positive impact on EMITT, which is one of the top 5 tourism exhibition in the world, EMITT Exhibition Director Hacer Aydın, ''Previous year at EMITT, which attracted 33.595 visitors from 110 countries and nearly 500 exhibitors, we welcomed more than 200 hosted buyers from 55 countries including America, Australia, France, Italy, Spain, Portuguese, Canada, Greece, Russia, India, Qatar, Saudi Arabia, Egypt and Azerbaijan in İstanbul. Cyclical developments such as the possible problems in the natural gas supply of Europe due to the war between the Russia and Ukraine strengthen the interest of foreign tourists in our country. Therefore, this year’s EMITT set a record with high demand from exhibitors.

TOURISM IS ACCELERATING IN TÜRKİYE AND THE WORLD

Pointing out the in 2020, the number internationally traveling individuals decrease to 401 million by 71 percent when compared to the previous year, therefore tourism expenditures decrease536 billion dollars by 60 percent, Hatice said: “In 2021, the figures showed a 5 percent increase in the number of tourists and a 15 percent increase in tourism revenue compared to the previous year. For 2022, there are radical increases in the figures. The tourist number increased by 210 percent and reached 365 million in the first 6 months of this year. By the end of the 2022, it is expected that 600 million tourists visit the country and the tourism revenue will reach 840 billion dollars.” Her words summarizes the change in the sector in the last 2.5 years.

Highlighting the fact that Türkiye has also received its share of this development as of the first 6 months of this year, Aydın states: ''Our country’s aim was to reach 45 million tourists and achieve 35 billion dollars in tourism revenue in the beginning of 2022. When we examine the figures of the first 8 months of this year, compared to the same period of the previous year, the tourist number reached to 2.5 million by increasing 108,5 percent. When comparing the tourism revenues of the first 6 months of the 2022 and the first six months of the previous year, the country achieved 14.17 billion dollars revenue by increasing 160 percent. There is high growth in urban and shopping tourism particularly in Istanbul. At the end of the year 2022, it is expected that tourists’ expenditure on clothing and footwear will reach 4.5 billion dollars.'' She points out the breakdown in the tourism revenue in her speech.

Emphasizing the high occupancy rate in hotels and tourism facilities in the October-November, Aydın continues her words as follows:

"In the winter season starting from December, demand is expected to be high due to many factors. As I mentioned before current energy crisis in Europe might lead the European tourist to spend winter in Türkiye. Antalya region continues its preparations in this issue. Türkiye also has a preferable destination in terms of shopping. This indicates that the shopping tourism will be alive in winter months. Traditional winter tourism, thermal tourism, gastronomic, culture, and congress tourism will also become prominent in winter. Türkiye has an advantageous position in Europe against the tourism sectors of countries such as Italy, Spain and Greece which will implement energy conservation and take relevant measures. Regarding the winter season, which is possible to achieve high numbers in tourism, I believe that Türkiye will easily reach 55 million tourists and achieve 45 billion dollars tourism revenue with the Medium-Term Program in 2023.''
Back